Overwatch data is promoted from bronze - silver - gold - presentation to ensure data consistency and quality as the data is enriched between the stages. The presentation layer is composed of views that reference the latest schema version of the gold layer. This disconnects the consumption layer from the underlying data structure so that developers can transparently add and alter columns without user disruption. All tables in each layer (except consumption) are suffixed in the ETL database with _layer.

Note, the ETL database and consumption database are usually different, determined by the configuration.

A snapshot is a point in time image of a context. For example, Cluster and Job definitions come and go in a Databricks workspace but at the time of an Overwatch run, there is a state and the snapshots capture this state.

Several snapshot tables can be found in the bronze layer such as clusters_snapshot_bronze. As a specific example, this snapshot is an entire capture of all existing clusters and definitions at the time of the Overwatch run. This is an important reference point, especially in the early days of running Overwatch, as depending on when the process and logging was begun, many of the existing clusters were created (and last edited) before the audit logs could capture it therefore, the existence and metadata of a cluster would be missing from Overwatch if not for the snapshot. The snapshots also serve as a good last resort lookup for any missing data through time, espeically as it pertains to assets that exist for a longer period of time.

Snapshots should not be the first choice when looking for data regarding slow changing assets (such as clusters) as the resolution is expectedly low, it’s much better to hit the slow changing dimensions in gold, cluster, or even in silver such as cluster_spec_silver. If the raw data you require has not been enriched from raw state then you likely have no other choice than to go directly to the audit logs, audit_log_bronze, and filter down to the relevant service_name and action.

Be weary of the term JOB when working with Overwatch (and Spark on Databricks in general). A Databricks Job is a very different entity than a Spark Job. The documentation attempts to be very clear, please file a ticket if you find a section in which the difference is not made clear.

The specificities can vary slightly between cloud provider but the general methodology is the exact same. Specific differences will be discussed in Cloud-Specific Variations section.

Each module is responsible for building certain entities at each layer, bronze, silver, gold, and presentation. The mapping between module and gold entity can be found in the Modules section. Each module is also tracked individually in the primary tracking tabe, Pipeline_Report.

Each Overwatch Run takes a snapshot at a point in time and will be the uppermost timestamp for which any data will be captured. Each Overwatch Run also derives an associated GUID by which it can be globally identified throughout the run. Each record created during the run will have an associated Overwatch_RunID and Pipeline_SnapTS which can be used to determine exactly when a record was loaded.

The “from_time” will be derived dynamically for each module as per the previous run snapshot time for the given module plus one millisecond. If the module has never been executed, the primordialDateString will be used which is defined as current_date - 60 days, by default. This can be overridden in the config. Some modules can be very slow / time-consuming on the first run due to the data volume and/or trickle loads from APIs. Best practice is to set your primordialDateString (if desired > 60d) AND set “maxDaysToLoad” to a low number like 5. It’s important to balance sufficient data to fully build out the implicit schemas and small enough data to get through an initial valid test.

More best practices can be found in the Best Practices section; these are especially important to reference when getting started.

The Pipeline_Report table controls the start/stop points for each module and tracks the status of each run. Manipulating this table will change the way Overwatch executes so be sure to read the rest of this page before altering this table.

The Pipeline Report is very useful for identifying issues in the pipeline. Each module, each run is detailed here. The structure of the table is outlined below.

A pipReport view has been created atop the pipeline_report table to simplify reviewing the historical runs. The query most commonly used is below. If you are asked for the pipReport, please provide the output from the following

For the developers – This output is created as a DataSet via the Case Class com.databricks.labs.overwatch.utils.ModuleStatusReport

Overwatch will default timezone to that of the server / cluster on which it runs. This is a critical point to be aware of when aggregating Overwatch results from several workspaces across different regions.

Several modules depend on other modules as source input; as such, as you can imagine, we don’t want modules to progress if one of their dependencies is erroring out and not populating any data. To handle this, Modules have dependencies such that upstream failures will cause downstream modules to be ineligible to continue. There are several types of errors that result in a module failure, and those errors are written out in the pipeline_report when they occur. Sometimes, there will truly be no new data in an upstream Module, this is ok and will not stop the progression of the “until” time as no data is not considered an error. Below are the ETL Modules and their dependencies 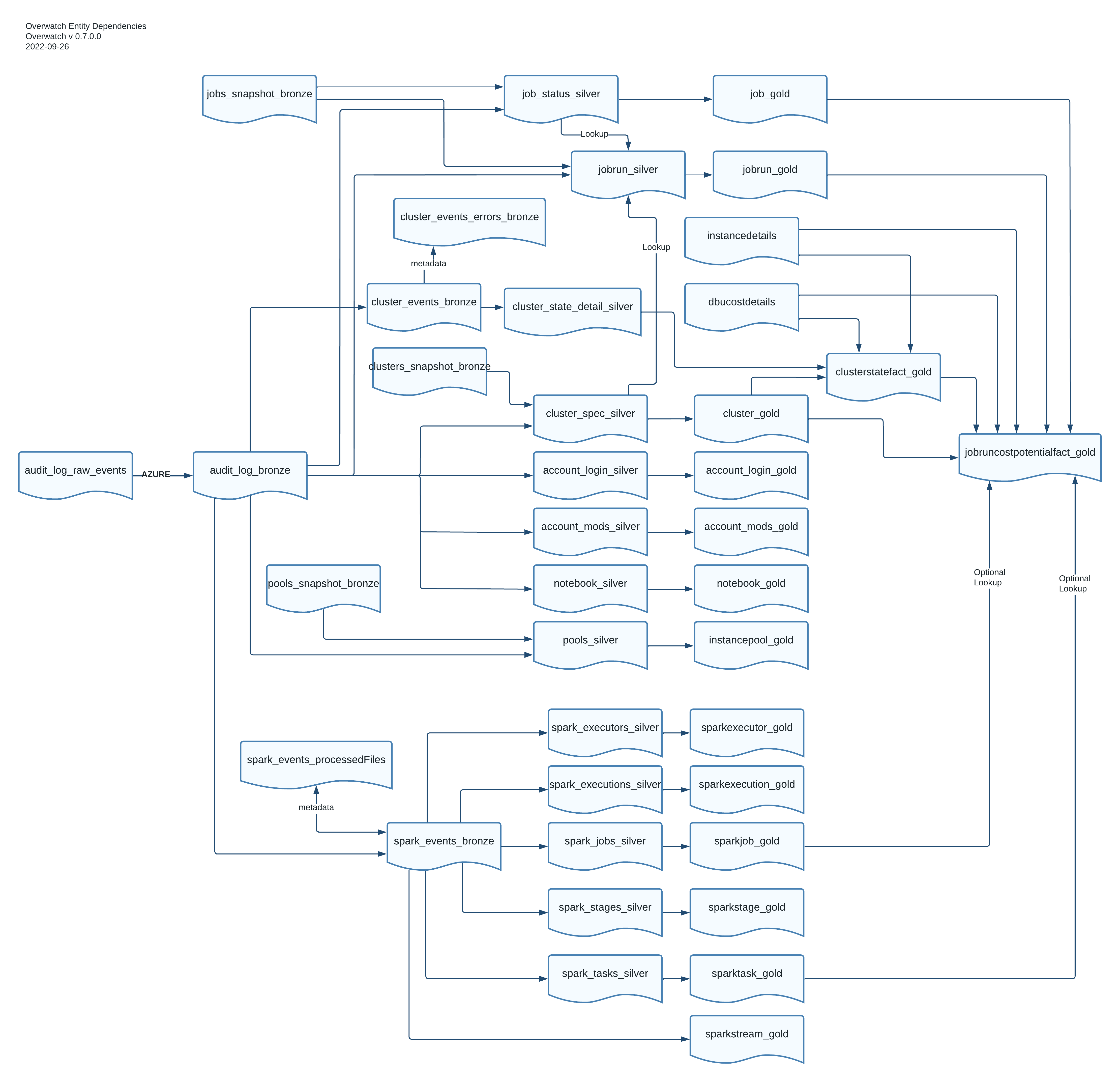 CAUTION Be very careful when attempting to reload bronze data, much of the bronze source data expires to minimize storage costs. Reloading bronze data should be a very rare task (hopefully never necessary)

The need may arise to reload data. This can be easily accomplished by setting the “Status” column to “ROLLED_BACK” for the modules you wish to reload where:

Remember to specify the ModuleID for which you want to reload data.

Scenario Something has occurred and has corrupted the jobrun entity after 01-01-2021 but the issue wasn’t identified until 02-02-2021. To fix this, all data from 12-31-2020 forward will be rolled back. Depending on the details, the fromTime or the Pipeline_SnapTS could be used; for this scenario we will go back an extra day and use Pipeline_SnapTS as the incremental time column. Since we’re using delta, we are safe to perform updates and deletes without fear of losing data (In the event of an issue we could simply restore a previous version of the table).

After performing the steps above, the next Overwatch run will load the data from 12-31 -> current.

Rebuilding Spark Bronze – If you want to reprocess data in the spark modules, it’s strongly recommended that you never truncate / rebuild spark_events_bronze as the data is quite large and the source log files have probably been removed from source due to retention policies. If you must spark bronze you must also update one other table; spark_events_processedfiles in the etl database. If you’re rolling back the spark modules from Feb 02, 2021 to Dec 31, 2020, you would need to delete the tracked files where Pipeline_SnapTS >= Dec 31, 2020 and failed = false and withinSpecifiedTimeRange = true.

For smaller, dimensional, silver/gold entities and testing, it’s often easier to just drop the table than it is to delete records after some date. Remember, though, it’s critical to set the primordialDateString from time if rebuilding entities with more than 60 days.

As in the example above, it’s common to need to rerun only a certain layer for testing or reloading data. In the example above it’s inefficient to run the bronze layer repeatedly to reprocess two tables in silver and gold. If no new data is ingested into bronze, no modules outside of the two we rolled_back will have any new data and thus will essentially be skipped resulting in the re-processing of only the two tables we’re working on.

The main class parameters allows for a single pipeline (bronze, silver, or gold) or all to be run. Refer to the Getting Started - Run Via Main Class for more information on how to run a single pipeline from main class. The same can also be done via a notebook run, refer to Getting Started - Run Via Notebook for more information on this.