Expectation Check Note that Overwatch analyzes nearly all aspects of the Workspace and manages its own pipeline among many other tasks. This results in 1000s of spark job executions and as such, the Overwatch job will take some time to run. For small/medium workspaces, 20-40 minutes should be expected for each run. Larger workspaces can take longer, depending on the size of the cluster, the Overwatch configuration, and the workspace.

The optimization tactics discussed below are aimed at the “large workspace”; however, many can be applied to small / medium workspaces.

Note that there are two modules that simply cannot be linearly parallelized for reasons beyond the scope of this write-up. These limiting factors are only present in Bronze and thus one optimization is to utilize one cluster spec for bronze and another for silver/gold. To do this, utilize Databricks' multi-task jobs feature to run into three steps and specify two cluster. To split the Overwatch Pipeline into bronze/silver/gold steps refer to the Main Class Setup Configuration

Below is a screenshot illustrating the job definition when broken apart into a multi-task job. 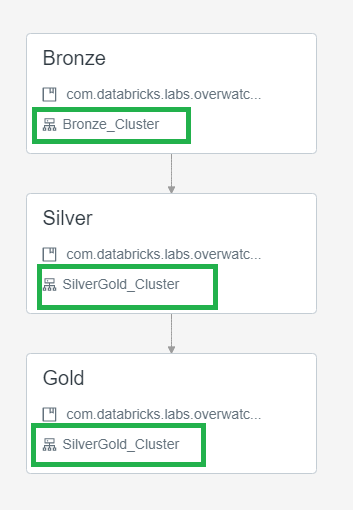 Externalizing the optimize and z-order functions is critical for reducing daily Overwatch runtimes and increasing efficiency of the optimize and z-order functions. Optimize & z-order are more efficient the larger the dataset and the larger the number of partitions to be optimized. Furthermore, optimize functions are very parallelizable and thus should be run on a larger, autoscaling cluster. Lastly, by externalizing the optimize functions, this task only need be carried out on a single workspace per Overwatch output target (i.e. storage prefix target).

The Overwatch pipeline has always included the Optimize & Z-Order functions. By default all targets are set to be optimized once per week which resulted in very different runtimes once per week. As of 0.6.0, this can be removed from the Overwatch Pipeline (i.e. externalized). Reasons to externalize include:

To externalize the optimize and z-order tasks: 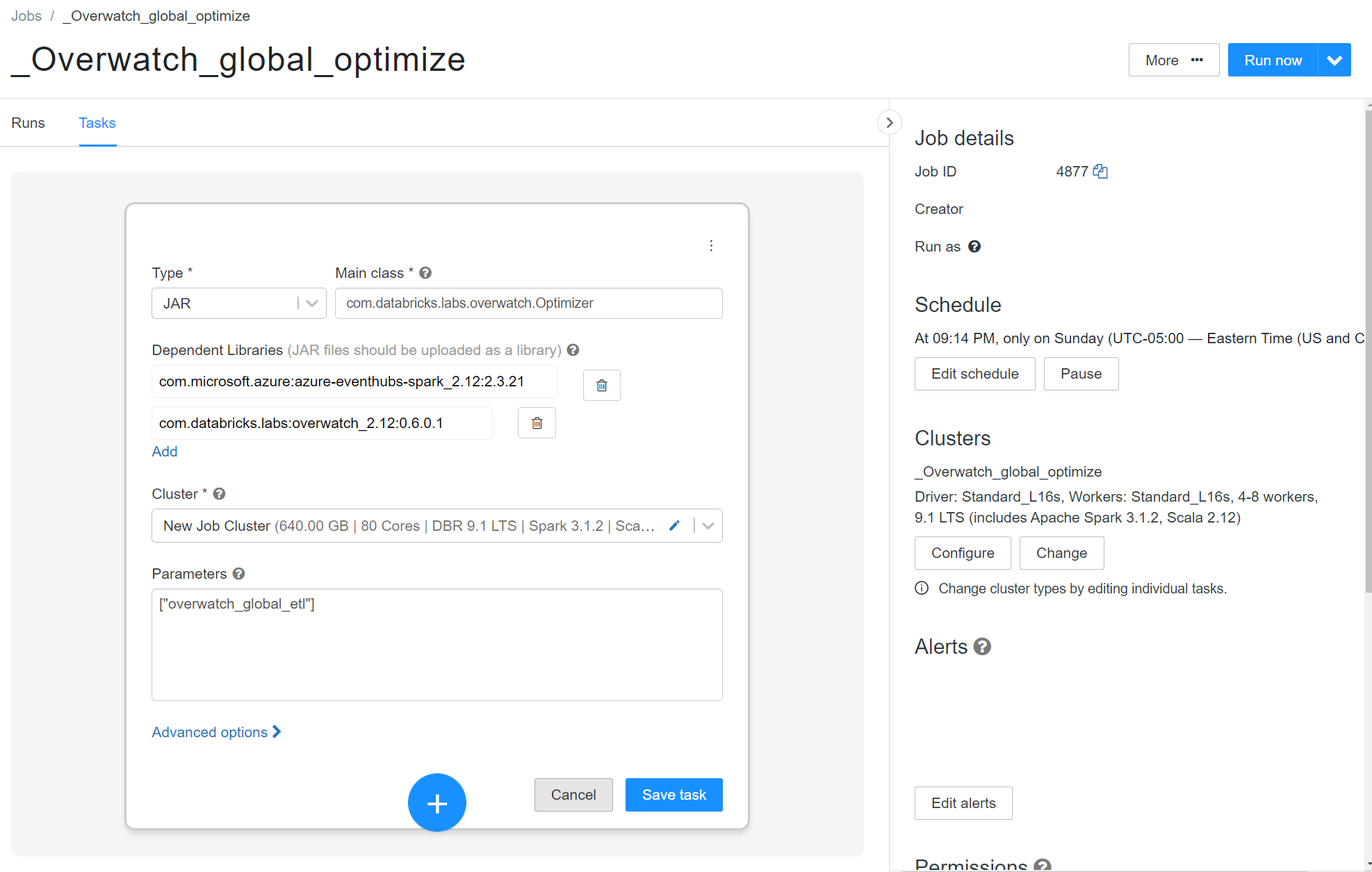 Interacting With Overwatch and its State

Use your production notebook (or equivallent) to instantiate your Overatch Configs. From there use JsonUtils.compactString to get the condensed parameters for your workspace.

NOTE you cannot use the escaped string, it needs to be the compactString.

Below is an example of getting the compact string. You may also refer to the example runner notebook for your cloud provider.

As of 0.6.1 this helper function is not expected to work across versions, meaning that if the last run was on 0.6.0.4 and the 0.6.1 JAR is attached, don’t expect this method to work

Now that you have the workspace you can interact with Overwatch very intuitively.

After the last period in the command above, push tab and you will be able to see the entire derived configuratin and it’s state.

Interacting with the Pipeline

When you instantiate a pipeline you can get stateful Dataframes, modules, and their configs such as the timestamp from which a DF will resume, etc.

Instantiating a pipeline gives you access to its public methods. Doing this allows you to navigate the pipeline and its state very naturally

A “target” is essentially an Overwatch-defined table with a ton of helper methods and attributes. The attributes are closed off in 0.5.0 but Issue 164 will expose all reasonably helpful attributes making the target definition even more powerful.

Note that the scala filter method below will be simplified in upcoming release, referenced in Issue 166

The nature of time throughout the Overwatch project has resulted in the need to for advanced time-series DataFrame management. As such, a vanilla version of databrickslabs/tempo was implemented for the sole purpose of enabling Scala time-series DataFrames (TSDF). TSDFs enable “asofJoin” and “lookupWhen” functions that also efficiently handle massive skew as is introduced with the partitioning of organization_id and cluster_id. Please refer to the Tempo documentation for deeper info. When Tempo’s implementation for Scala is complete, Overwatch plans to simply reference it as a dependency.

This is discussed here because these functionalities have been made public through Overwatch which means you can easily utilize “lookupWhen” and “asofJoin” when interrogating Overwatch. The details for optimizing skewed windows is beyond the scope of this documentation but please do reference the Tempo documentation for more details.

The function signature for “lookupWhen” is: