Welcome To OverWatch > Getting Started

Overwatch is run via one of two methods:

Below are instructions for both methods. The primary difference is the way by which the configuration is implemented and the choice of which to use is entirely user preference. Overwatch is meant to control itself from soup to nuts meaning it creates its own databases and tables and manages all spark parameters and optimization requirements to operate efficiently. Beyond the config and the job run setup, Overwatch runs best as a black box – enable it and forget about it.

Add the following dependencies to your cluster

There are some basic environment configuration steps that need to be enabled to allow Overwatch to do its job.

These activities include things like enabling Audit Logs, setting up security (as desired), etc. The setup activities are slightly different depending on your cloud provider, currently Overwatch can operate on aws and azure. Please reference the page that’s relevant for your deployment.

It’s best to run the first initialize command manually to validate the configuration and ensure the costs are built as desired. This should only be completed one time per target database (often many workspaces to one target database, the targets are then mounted on several workspaces to which they are appended by the Overwatch processes).

In a notebook, run the following commands (customized for your needs of course) to initialize the targets. For additional details on config customization options see configuration.

The following notebooks will demonstrate a typical best practice for multi-workspace (and stand-alone) configurations. Simply populate the necessary variables for your environment.

The code snippet below will initialize the workspace (simple aws example).

If this is the first run and you’d like to customize compute costs to mirror your region / contract price, be sure to run the following to initialize the pipeline which will in turn create some costing tables, which you can customize according to your needs. This is only necessary for first-time init with custom costs. More information below in the Configuring Custom Costs section.

This is also a great time to materialize the JSON configs for use in the Databricks job the main class (not notebook) is to be used to execute the job.

The target database[s] (defined in the dataTarget variable above) should now be visible from the data tab in Databricks. Additionally, the ETL database should contain the custom costing tables, instanceDetails and dbuCostDetails. This is a good time to customize compute prices if you so desire; after first init but before first pipeline run.

Don’t load years worth of data on your first attempt. There are very simple workspace cleanup scripts in the docs to allow you to quickly start fresh. Best practice is to load the latest 5 or so days (i.e. set primordial date to today minus 5) and let the entire pipeline run, review the pipReport and validate everything. If all looks good, now you can begin your historical loading journey. NOTE cluster events are only available for 30 days thus clusterStateFact and jobRunCostPotentialFact will not load for data older than 30 days.

Now that we understand our config and have a valid workspace object, the Overwatch pipeline can be run. It’s often a good idea to run the first run from a notebook to validate the configuration and the pipeline.

AZURE Must use version 0.5.0.4 or later so as not to pass EH connection string credentials into arguments in clear text.

The Main class version does the same thing as the notebook version the difference is just how it’s kicked off and configured. The tricky party about the main class is that the parameters must be passed in as a json array of escaped strings (this is why the JsonUtils above have the option for escapedString. The “OverwatchParams” object gets serialized and passed into the args of the Main Class. To simplify the creation of this string simply follow the example above Initializing The Environment and use the escapedConfigString. Now that you have the string, setup the job with that string as the Parameters. The Main Class for historical batch is com.databricks.labs.overwatch.BatchRunner 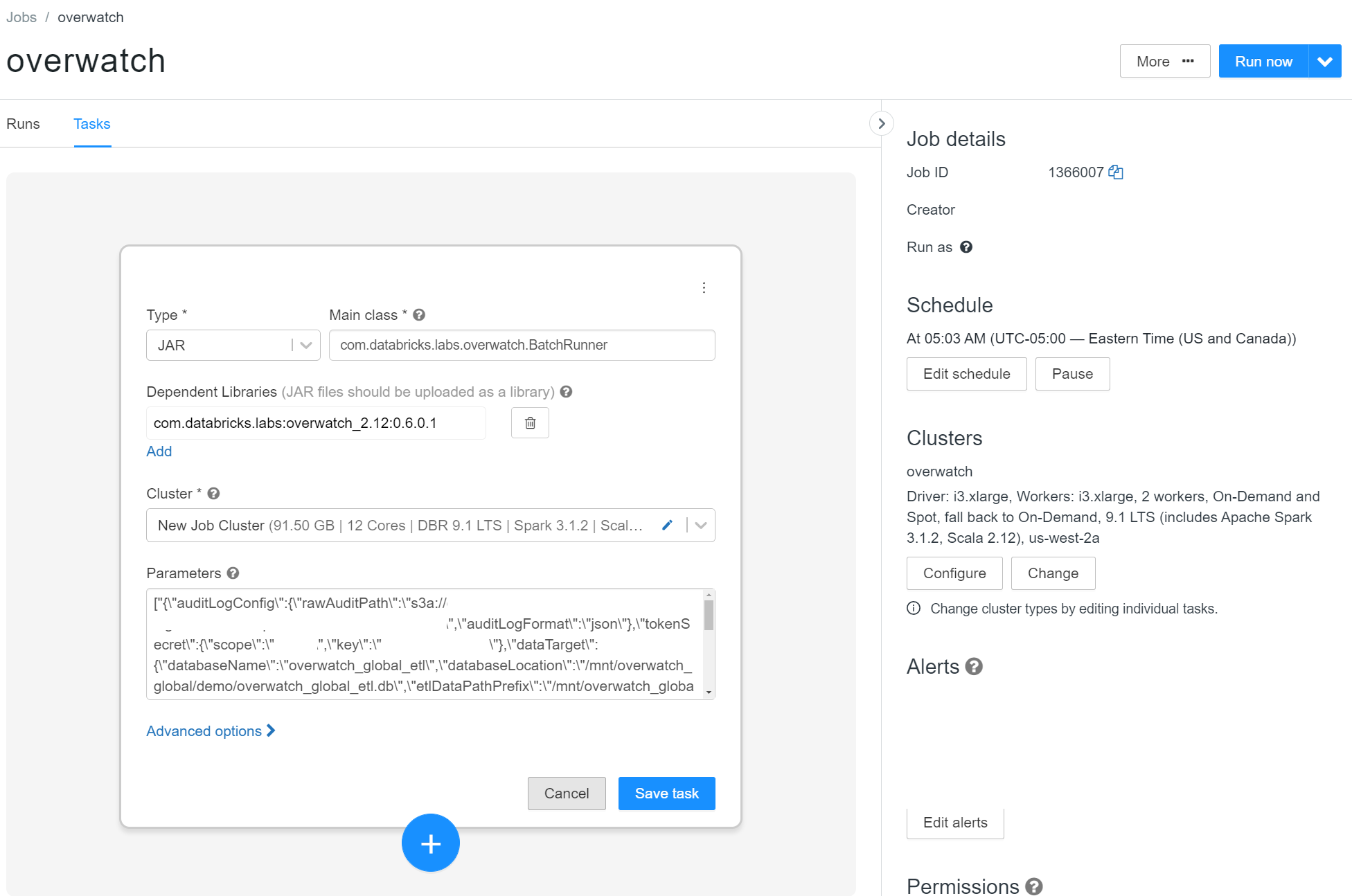 There are three essential components to the cost function:

To customize costs generate the workspace object as demonstrated in the Jump Start Notebooks above. Once the configs are built out and the workspace object is ready, the Bronze pipeline can be instantiated (but not ran) to initialize the custom cost tables for customization.

Note that each subsequent workspace referencing the same dataTarget will append default compute prices to instanceDetails table if no data is present for that organization_id (i.e. workspace). If you would like to customize compute costs for all workspaces,
export the instanceDetails dataset to external editor (after first init), add the required metrics referenced above for each workspace, and update the target table with the customized cost information. Note that the instanceDetails object in the consumer database is just a view so you must edit/overwrite the underlying table in the ETL database. The view will automatically be recreated upon first pipeline run.

IMPORTANT These cost tables are slow-changing-dimensions and thus they have specific rule requirements; familiarize yourself with the details at the links below. If the rules fail, the Gold Pipeline will fail with specific costing errors to help you resolve it.

Helpful Tool (AZURE_Only) to get pricing by region by node.

Sample compute details available below. These are only meant for reference, they do not have all required fields. Follow the instruction above for how to implement custom costs. AWS Example | Azure Example

The Overwatch parameters take in scopes which reference an abstract Databricks component that can be enabled/disabled for Overwatch observability. If a scope such as jobs is disabled, none of the bronze/silver/gold modules that materialize databricks jobs will be created. Furthermore, neither will any of their dependencies. For example, if jobs is disabled, jobs, jobRuns and jobRunCostPotentialFact will all be missing from the data model as they were disabled. It’s recommended to just leave them all enabled unless there’s a specific need to disable a scope. For more information on scopes and modules please refer to Modules

For more information on how to configure the separation of ETL and consumption databases, please reference the configuration page.

Additional steps can be taken to secure the storage location of the ETL entities as necessary. The method for securing access to these tables would be the same as with any set of tables in your organization.